So as many of my friends know, I have been using the stumbleupon addon to find new and interesting sites.  It is probably one of the greatest addons that I have seen for IE/FireFox, in a long time.  Basically you download this tool bar (optional and configurable), configure your account with categories you would like to see, (ei: Comics, Computers, Linux, Comedy)  i keep meaning on posting great links i find with this tool, but i continue to forget.  So while im here late at work, i will post whatever links i stumble below, so you can get an idea of the awesome.  I wont lie, sometimes you find junk, but most of the time you find something entertaining.  I have spent a few nights up late telling myself just one more stumble for hours.

This great tool can be found at : http://www.stumbleupon.com/ 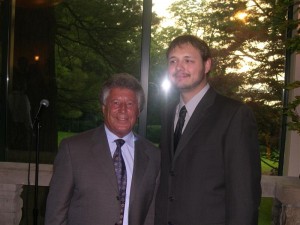 So.. Last weekend I was elected to work our biyearly managers meeting. This is the first time the managers meeting has been close to our office. Past meetings have been held in such areas as Vegas, and Orlando. This year they chose… Woodcliff Lake NJ. Not most of you know, but I am not a manager at my company. I am merely a lowly IT Guy. Normally as IT Staff we are not invited to these events. Because the meeting was only an hrs drive away from my house, 2 of us were picked to work the event. At first I was told we are only staff and we will not be invited to any of the events or dinners, and I accepted that, but all of a sudden they decided we were invited to the events. I was told the Monday night dinner was a Suit and Tie dinner, and the Sunday night dinner was a sports jacket dinner. I was not really looking forward to any of this at this point, but since they now invited me, I felt obligated to go. Thus began the weekend of no sleep.

I arrived late Sat night at the hotel in Woodcliff Lake. The Hilton where the event was held, was booked up for Sat, so I had to stay a local Marriot, then transfer too the Hilton for the rest of the event. Once I arrived at the Marriot, I realized I had forgotten my black shoes. This continues to set the pace for the weekend. I needed black shoes for this “event” Monday night, which I still did not know what was going on. I was truly confused as to what was going on all weekend. So here I was 11:30 at night trying to figure out where I can get shoes. I called the front desk, and he said there was nothing close to the hotel, and since the next day was Sunday, everything would be closed due to the NJ “Blue Laws.”

Sunday morning, I was required to be at the “office”, in the Hilton, at 6am to start setting up. To make things better at about 2 am, in my hotel, they decided to have a party outside my room door. So finally I get to the Hotel, and we start setting up for the events. I finally find out that I could choose between 2 events that were left over, NBC Studio Tours, or the Empire State Building. Sunday was the short day for the meetings. Everything wrapped up, and we went off to our events at 12.

Touring NBC was cool, but it was like 100000 Degrees out, and I was extremely tired so all I wanted to do was go to sleep. So we finally get to Dinner, which turns out to be a glass boat that tours nyc. Dinner was good, and there were surprise guests MLB stars Bill Buckner and Lou Brock. These were the first set of mystery guests to be at the meeting. While relaxing on the boat one of the waitresses came over and asked me if I wanted another, and I said ok. I thought she was asking me if I wanted more beer, but it turned out she was asking me if I wanted another dinner. I ate my second dinner with Glee. We finally got back to the hotel at about midnight.

Monday morning I was back at the “office” at 6am. This was the long day. Events ran from 8 am to 5pm. Right after all the presentations, we were off to the black tie event. I ran upstairs and got changed and was back down to take the bus’s, to the mansion. I found out that the “show” they were putting on was a Mock Wedding. It was just about as much fun as getting my teeth pulled out with a rock and a string. The highlight of the event was meeting our guest of the night, Mario Andretti. I took one of the first buses out of that place and got back to the hotel at about 11:30.

Tuesday morning, you guessed it, back in the “office” at 6am. This was also a short day. Olympic gold medal gymnast Shannon Miller was a special guest. I could not wait to get out of the meetings. Today is Friday, and im still dragging.

There were a few great highlights of the weekend. The First was meeting Mario Andretti; Second I was able to set in the Richard Petty Race car. Also Our MC was Tim Pulnik, a stand up comic from Orlando Florida.

Im Just so glad its over. I hope I can catch-up on sleep soon.

A few weeks ago i wrote this blog entry.

So today i took the A+ Certification Tests. For those who don’t know, the A+ Certification process involves 2 tests, The 601 A+ essentials, and the 602 IT Technician. Each test, tests your knowledge in different areas of computer support, repair, and general knowledge that any IT support person should have. For the past 7 years i have been making excuses why i could not take the tests, and otherwise being lazy. I had built up these tests in my mind to be harder then they actually are. I finally decided, I need to start moving ahead with my life. Its strange how sometimes you build something up in your mind so much, and it ends up being the complete opposite. In the past, Not having an A+ certification cost me potential job’s. I even spoke to a place that would not even interview me because i did not have this certification. I know plenty of people who have obtained this certification, and i would not trust my PDA with them, let alone a whole computer. The only thing Organized test like this show is that someone can cram their head full of a bunch of useless data, and regurgitate it back on to a piece of paper (in this case a computer screen). Yet, with out this stupid piece of paper, you are not worth looking at. I can understand why certifications exist, but there should be more to these things. How can someone who has almost no idea how to fix a computer, be certified to do so? what if an ASCE Master technician never had to touch a car, would you want him working on your car? This just goes to show that there are 2 types of learned people in the world. Those who are “Book Smart” and those who are “Street Smart.” In this case “Street Smart” means someone who has practical knowledge on a subject that you would never get out of a book. Basically, real world experience. This is what i would be looking for as an employer, not a piece of paper claiming they know what they are doing. Now that i have set the goal of obtaining my A+ Certs, i am now Pressing forward towards my goal of Microsoft Certified Software Engineer (MCSE). From there… who knows. See you then.