Ever since i can remember I’ve loved video games. From my early days, of playing the Nintendo Entertainment System (NES) to now, i have always had a passion of obtaining whatever goal that was set forth in front of me, on that wonderful glowing box called a TV. I remember Spending hours and hours trying to defeat the forces of bowser, trying to get the high score in Mortal Kombat, and saving hyrule from the evil Gannon. At that time, the most exciting games to play were the arcade machines. Although they are growing more and more of a rarity in this day and age, arcade machines, and more specifically arcades themselves brought an experience unlike any other. There was nothing like Digging through your couch cushions searching wildly for the one thing that made those wonderful machines alive, The Quarter. Armed with a pocket full of quarters, children would flock to arcades like birds flying south for winter. As a young child, i rarely had extra money to play arcade machines, which made them that much more special to me. As i get older now, the passion i once had for gaming is still there, but the ability to play is gone. Too many real life projects now get in the way. One of the many reality’s of being an adult. I remember wishing so much that i was older, now i look back, and wish i still had that care free life. As i grew up, I became very involved in the computer world.

END_OF_DOCUMENT_TOKEN_TO_BE_REPLACED

My first exposure to Resident Evil 5, was the demo available on psn.  After playing this demo, i thought this game was horrible.  The demo was extremely hard, and within 10 min of playing i was stuck dying over and over again.   I quickly uninstalled the demo, and said, guess im not playing that game again.   The Resident Evil series has always intrigued me, but i always found it too difficult to play, and i usually walked away from it before really getting any where.   Somehow RE5 ended up in my gamefly list, and before i realized it i had a copy sitting at my house.  So i figured i would try out the game one more time.  Now its always been my usual tenancy to play the games on medium, because playing on easy was always too easy.    I played about 10 min into the game, and was stuck in the same spot.  I threw the game to the side and said i was gonna play something else.  But something was nagging me to try it again, so this time i put it on easy….

END_OF_DOCUMENT_TOKEN_TO_BE_REPLACED

So i dont know if you all know BigBadBob, but hes got a new site.  He was formerly known as Ron Connery, Now he can be found at http://www.bigbadbob113.com go visit him.

So here I am taking time out of my busy schedule to let you and maybe a few other people know that it is our duty to our children and to their children and to our yet unborn posterity to provide an atmosphere of mutual respect, free from officialism, irrationalism, and all other forms of prejudice and intolerance. For openers, by allowing Robert to inculcate cranky paroxysms, we are allowing him to play puppet master. All he really wants is to hang onto the perks he’s getting from the system. That’s all he really cares about.

Is it important that Robert uses vulgar language and makes obscene gestures at those whose opinions differ from his? Of course it’s important. But what’s more important is that the fallout from his snarky catch-phrases has been an increasingly predatory environment of calculation, scheming, and pandering that will, by virtue of its omnipresence, submerge us in a sea of credentialism. But I digress. This is not the first time I’ve wanted to compare, contrast, and identify the connections among different kinds of prudish gnosticism. But it is the first time I realized that if you read his writings while mentally out of focus, you may get the sense that snotty, combative scalawags are easily housebroken. But if you read Robert’s writings while mentally in focus and weigh each point carefully, it’s clear that if we don’t remove the Robert threat now, it will bite us in our backside quicker than you can double-check the spelling of “hexosemonophosphoric”.

Robert is currently limited to shrieking and spitting when he’s confronted with inconvenient facts. Sooner or later, however, Robert is likely to switch to some sort of “trick us into trading freedom for serfdom” approach to draw our attention away from such facts. If you want to clear up these muddied waters with some reality, then tell everyone you know the truth, that some day, in the far, far future, he will realize that his most recent mawkish claim (viz., that we should derive moral guidance from his glitzy, multi-culti, hip-hop, consumption-oriented utterances) is a tissue of lies, bias, and emotional manipulation from beginning to end. This realization will sink in slowly but surely and will be accompanied by a comprehension of how Robert may be reasonably cunning with words. However, he is entirely scummy with everything else. By working together, we can protect our peace, privacy, and safety. May we never forget this if we are to deny Robert  and his assistants a chance to trade facts for fantasy, truth for myths, academics for collective socialization, and individual thinking for group manipulation.

Special Thanks to the complaint letter generator http://www.pakin.org/complaint/

So to keep with our theme of Zombie Mayhem, I bring to you Urban Dead. This game has been around for quite some time now. It is an extremely basic web based game, where you move around the city, collecting items, and barricades to save you from the zombies outside. Different classes enable you to have different abilities as in many games, but this one has a twist… you can actually play as the zombies! Every hour you get a certain amount of moves, but if your moves run out and your outside, one of the lingering zombies may come past and kill you, bringing you to the ranks of Zombie fun. Some players may choose to stay this way, and play their game as the Zombie menance, but dont worry, you can be converted back to human provided you can find a some one with the proper syringe to do so. As i said before the game has a very basic display (Click Here to see a sample) Any way enough talking about this rather creative game, its time to go play it, Have fun. 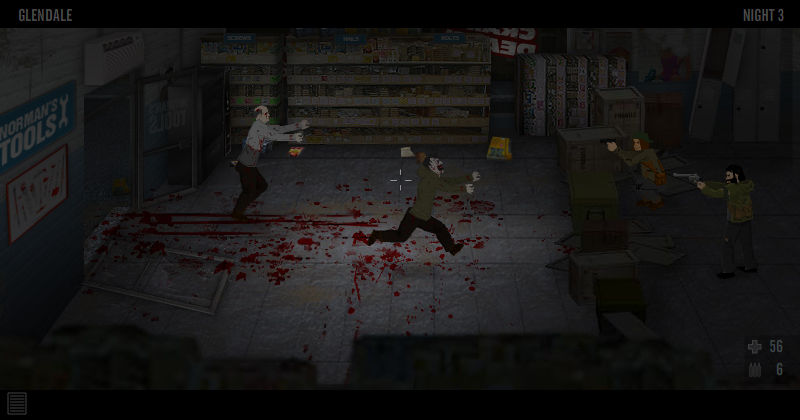 END_OF_DOCUMENT_TOKEN_TO_BE_REPLACED

Welcome to Zombie Month Here at theCrazySteve.com Expect Lots of Zombie Goodness. I start you off with this pretty nifty Zombie Simulator i found on the net. It simulates what a zombie outbreak would be like if it ever really happened.

Rules and instructions after the break:

END_OF_DOCUMENT_TOKEN_TO_BE_REPLACED 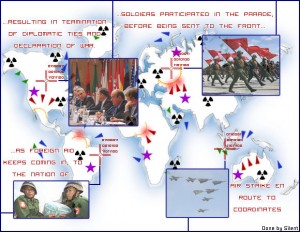 Cybernations is an online browser based nation simulation game.   You control all aspects of your nation, from Government type, National Religion, ECT.  You build up armies, make trade agreements with nations, and attack others.  All while keeping your nations population happy.  The interesting thing about this game, is how certian military actions, can effect the whole planet, and not just the nation you are attacking.  If you have some free time check it out.  It is not a very time consuming game like some other games out there.