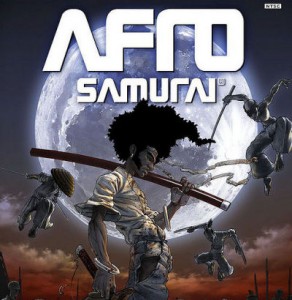 AfroSamurai is a 5 part animated miniseries that aired on SpikeTV In early 2007.  I had never heard of this show until the release of the video game this year.  Even then i did not think much of it, but something told me to add it to my gamefly game list.  A few months back i finally received it.  I held on to it for a little over a month playing through its colorful and imaginative levels.  I still have not watched the episodes, but i am now more interested in them then ever.  The main character “Afro Samurai” and his sidekick are voiced by none other then Samuel L. Jackson.  As you could imagine the game is full of as much violence and profanity as i think they could squeeze in.

Afro Samurai is based in feudal Japan.  Afro’s father has been murdered and Afro is hunting for revenge.  In the world of Afro Samurai, it is said that the one who becomes “Number One” will rule the world, wielding powers akin to a god. Someone becomes Number One by killing the previous Number One and taking his ceremonial headband. However, the only rule in this world is that only the “Number Two” (also designated by a sacred headband) is allowed to challenge the “Number One.”  The most interesting part of the story is that any one can challenge the “Number Two” to a duel at any time.   Afro’s Father was the old “Number One”  and was challenged by Justice, a gunslinger, who was the “Number Two.”  Justice decapitated Afro’s Father right in front of young Afro.  The game takes place as Afro as an adult, and he is on a blood thirsty quest for revenge.  He wants to kill Justice, and he does not care who gets in his way.  Afro’s first step is to find the “Number Two” and Obtain the headband.  Throughout the game we are greeted by many flashbacks, including an extremely creepy one of his fathers head gasping for air and talking to Afro after it has been severed from its body, and interesting characters, whom we get to kill.

The controls are very easy to use, you have light attack,  heavy attack, jump, and kick.   Pressing these buttons in certain orders produce different combos.  Performing the right combo will end with a finishing blow that will kill your opponent, by severing off part of his body.  The game provides endless guys, to slice and dice.  There is even a mode where Afro’s sidekick pops up and you play “Body Part Poker”.  The goal is to sever body parts of your opponents, Head, legs, and arms, to create a poker hand.  I never figured out what the objective was, but it was fun none the less.

Between the interesting story, creative dialog, and violent game play, Afro samurai is great game i would recommend to any one.  Don’t pass this one by. 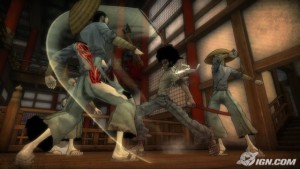 2 thoughts on “AfroSamurai The Game: Completed”